Deb Utton had things she wanted to do when she retired in 2018. After leaving her job as a financial specialist at the Vermont Department of Motor Vehicles, she spent a year taking trips and visiting with family and friends.

When a friend’s daughter mentioned Green Mountain Transit’s volunteer driver program, it piqued her interest. Volunteer drivers use their personal vehicles to give rides to Vermont residents who qualify for ride assistance and can’t access public transportation. They take passengers to and from medical appointments, pharmacies and grocery stores. 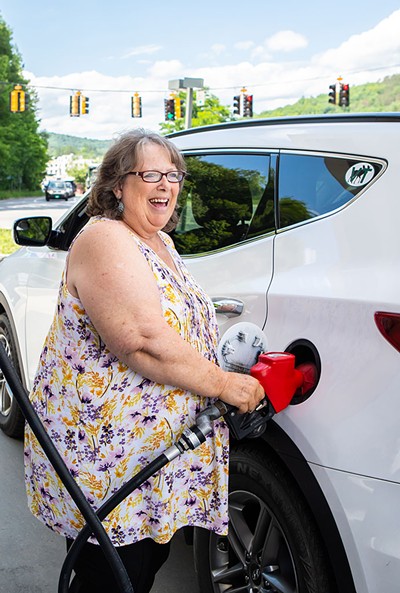 GMT reimburses volunteers for mileage at the federal rate set by the IRS, currently 56 cents per mile. Because it’s not employment income, it’s not taxable, and it doesn’t affect drivers’ Social Security benefits or car insurance rates.

Utton likes being behind the wheel. Perhaps it’s genetic — her parents were both truck drivers. “My mom used to drive the semi,” Utton says. Two years ago, she applied to be a driver for GMT.

Now Utton, 66, volunteers three or four days a week. It gives her an opportunity to talk with her passengers, who appreciate getting a lift. But most importantly, she says, “It gets me up off the couch, out of the house, so I’m not sitting here getting old.”

Utton is one of dozens of volunteer drivers in GMT’s network. During the pandemic, 50 percent of them kept driving while taking COVID-19 precautions, such as wearing masks and having masked passengers sit in the back seat. They helped their passengers access chemotherapy treatments and dialysis.

“Volunteer drivers were essential to the success of the organization during that difficult time,” says Director of Marketing and Planning Jamie Smith. “Their dedication spoke to the true nature of volunteerism in Vermont.”

Now, the agency hopes to attract more drivers across all of the areas it serves, but especially in Franklin and Washington counties, Smith says. “Volunteer drivers provide a critical service for the state, connecting rural Vermonters to services that they would otherwise struggle to access. And the program reimburses drivers, helping them to maintain their cars. It’s a win-win for everybody.”

GMT volunteers can choose which assignments to accept. They drive as much or as little as they want, and they can sign up for shifts whenever it’s convenient. “It’s totally up to you,” Smith says.

Utton fits in trips around when she watches her grandson, which is currently on Mondays. Sometimes she’ll go on an early morning run before his parents drop him off at her house. Those trips are usually close to Utton’s Montpelier home.

On other days, she drives people around the state, traveling to Morrisville, St. Johnsbury, Wallingford, Brattleboro. One recent weekday, Utton traveled from Montpelier to Rutland to St. Albans, then back to Montpelier — making a stop in Burlington along the way. “That was a long day,” she says.

For drivers like Helen Owen, a long day is typical. The 80-year-old Barre City resident has been volunteering for the GMT program for 24 years. She transports passengers in her Toyota RAV4 five days a week, sometimes six. She estimates that she logs 900 to 1,400 miles weekly, though it’s usually in the 1,100 to 1,200 range.

Like Utton, she regularly travels all over the state. “Yesterday, I went to Burlington three times and went to Stowe twice,” Owen says. She even drives people to Boston for medical procedures. She used to take passengers to New York City, too, before the program stopped sending volunteers that far.

The passengers are another reason Owen has kept at it. For a variety of reasons, they really need a ride, and they appreciate getting one.

“It’s rewarding, you know?” Owen says. “You’re helping people. And most of them are very grateful.”

Passenger Joanne Isham is; she lives in Northfield and doesn’t own a car. A GMT bus goes to Montpelier, but it runs just a few times a day. Isham takes the bus to Montpelier for adult education classes, but it’s not convenient to use for her doctor’s appointments. “You take it in, and you have to sit somewhere for hours,” she explains.

Isham, 47, has a disability and struggles with back pain and mobility issues. She has family in Vermont, but not nearby. Without the GMT volunteer drivers, she says, “I don’t know how I’d get to my appointments, I really don’t. I tell them all the time I’m so grateful.”

Like Isham, passengers typically use the service to get to appointments — physical therapy, counseling services, addiction treatment. Often they’re elderly. But William Croteau, a Barre resident who’s been driving for GMT for three years, says he’s driven younger people, too, including a woman in her thirties who travels to Burlington for cancer treatment.

“Those kind of break your heart,” he says.

Croteau, a 69-year-old retired teacher, likes talking with the people he drives. “I gave a ride the other day to a guy I worked with 40 years ago,” he says. “We had a good time.”

Utton feels the same way. “A couple of ladies I really enjoy having,” she says. “We talk about life experiences and recipes. We talk about the old days, how life used to be a little bit slower, not so crazy.”

She’s now Facebook friends with some of her passengers. “You do get their life stories,” Utton says. “You find out it’s a small world. They used to know my grandfather or my father. You connect that way.”

All passengers agree to certain rules when they sign up for rides: No eating and drinking in the vehicle, no profanity, no tips. They’re technically not supposed to talk to the driver, though most do. Not all, though.

Utton points out that occasionally passengers are stressed or having a tough time and might seem a little grumpy. “I don’t take it personal,” she says.

‘The Place to Be’

Driving in winter can be a challenge. Utton used to have a front-wheel-drive vehicle that wasn’t great in the snow; she cancelled a few of her rides because of it. But she recently upgraded to an all-wheel-drive Hyundai Santa Fe. “I felt very safe this winter on the back roads and going up the hills in God’s country,” Utton says.

Croteau makes his trips in a 2018 all-wheel-drive Honda HR-V. He uses a GPS and Mapquest and researches his routes in advance. Still, Vermont roads can be tricky. Once during a snowstorm, he picked up a rider in Cabot who needed to get to East Calais, a town that has “more dirt roads than anywhere I’ve ever seen,” Croteau reports.

As they navigated the twists and turns, they noticed the snow getting deeper and deeper. Then they passed a sign that surprised them both.

Croteau delivers the punchline: “We were on a snowmobile trail!”

Luckily, they got back on the road safely. Afterward, according to Croteau, the passenger told him, ‘You’ve sold me on this car.’”

That little adventure wouldn’t stop Croteau from recommending GMT’s volunteer program to potential drivers. He notes that the 989 miles he drove the week of his interview netted him $553.84, tax-free. “I think it’s a great gig for somebody who loves Vermont,” he says.

Owens agrees: “If you have time and you like to keep busy, it’s the place to be.”

This article was commissioned and paid for by Green Mountain Transit.