TikTok banned MLMs six months ago, but the predatory schemes are still thriving on the platform

Even though TikTok banned content promoting multi-level marketing schemes (MLMs) nearly six months ago, it appears that the company is not actually enforcing this policy. MLMs are attempting to recruit new members on TikTok by strategically plugging their products, many of which promise miracle weight loss results. Some MLMs are even sponsoring influencers to plug their products without explicitly disclosing that it’s an advertisement. TikTok’s negligence and failure to enforce its own guidelines is potentially putting its users in financial and even physical danger.

Multi-level marketing schemes are companies that recruit salespeople to buy their products and sell them directly to others, and those individual “distributors” either make money from commissions or by recruiting new distributors to resell their products. MLMs are inherently predatory and often target women and people with low incomes to become participants, and studies estimate that anywhere from almost half to nearly all participants lose money — leading critics to frequently compare MLMs to fraudulent pyramid schemes.

Herbalife, an MLM that sells dietary supplements, had to pay a $200 million settlement in 2016 for deceiving its distributors about how much money they could actually make while selling the company’s products. According to the Latin Times, Herbalife admitted that only about 11% of its distributors “ever make a dime.”

According to a 2018 AARP study of multi-level marketing schemes, MLM participants were more likely to be women and only about 25% of participants reported making any sort of profit; 27% of participants broke even and 47% lost money. In 2011, research submitted to the Federal Trade Commission (FTC) found that “the loss rate for MLMs is at least 99%,” meaning that “at least 99 out of 100 participants actually lose money.”

One of the most concerning statistics in the AARP report found that 48% of first-time MLM participants were between 18-25 years old — the same age as a significant percentage of TikTok’s user base. The report also noted that “household income was generally low when participants first became involved in direct sales.”

TikTok’s policy banning MLMs falls under the company’s “frauds and scams” community guidelines. “We do not permit anyone to exploit our platform to take advantage of the trust of users and bring about financial or personal harm” writes TikTok, explicitly prohibiting “content that depicts or promotes Ponzi, multi-level marketing, or pyramid schemes.”

TikTok garnered a significant amount of positive PR after announcing its policy change prohibiting MLMs last December, but the platform isn’t actually keeping its promise. Instead, by not actively enforcing its own policies against MLM recruitment content on the platform, TikTok risks enabling these predatory companies to exploit their young and financially vulnerable users.

MLMs still appear to be thriving on TikTok despite the supposed ban, and the platform seems to be enabling them.

MLMs take on many different forms, which is one of the reasons why they can sometimes be hard to spot. Some of the active MLMs on TikTok sell essential oils, skin care products, nails, scented wax warmers, and more. In one case, TikTok even verified at least five Avon accounts, despite Avon being one of the largest MLMs worldwide. Avon is also seemingly sponsoring influencers to promote its products on TikTok in a coordinated advertising campaign.

Other popular MLMs on TikTok sell weight loss products and supplements. Some users post before-and-after weight loss photos and attribute body changes to certain supplements or products they claim to have used, encouraging users to follow links in their bio to purchase the same ones; those miracle products often end up coming from MLMs.

Beyond the financial harm participants can incur by becoming involved in MLMs pushing these products, FDA regulators report that unregulated weight loss supplements can also cause “serious harm” to users. There have been numerous reports to the FDA of harm caused by unregulated weight loss products, “including increased blood pressure, heart palpitations (a pounding or racing heart), stroke, seizure and death.”

In spite of these potential dangers, content promoting such supplements — and so-called “opportunities” to become involved in selling them — are rampant on TikTok.

One TikTok influencer with over 9.8 million followers posted what appears to be a video sponsored by the Shaklee Corporation, an MLM that distributes supplements and weight loss products.

Her video caption reads “Let’s reset and choose HEALTHY in 2021 with @shakleehq #2021reset #MakeHealthyHappen.” There is no reference to this being a sponsored post in the video itself and the caption is vague, seemingly violating the FTC’s recommendations for influencer advertising disclosures that are legally required to avoid deceptive marketing practices. The video already has over 4.8 million views. 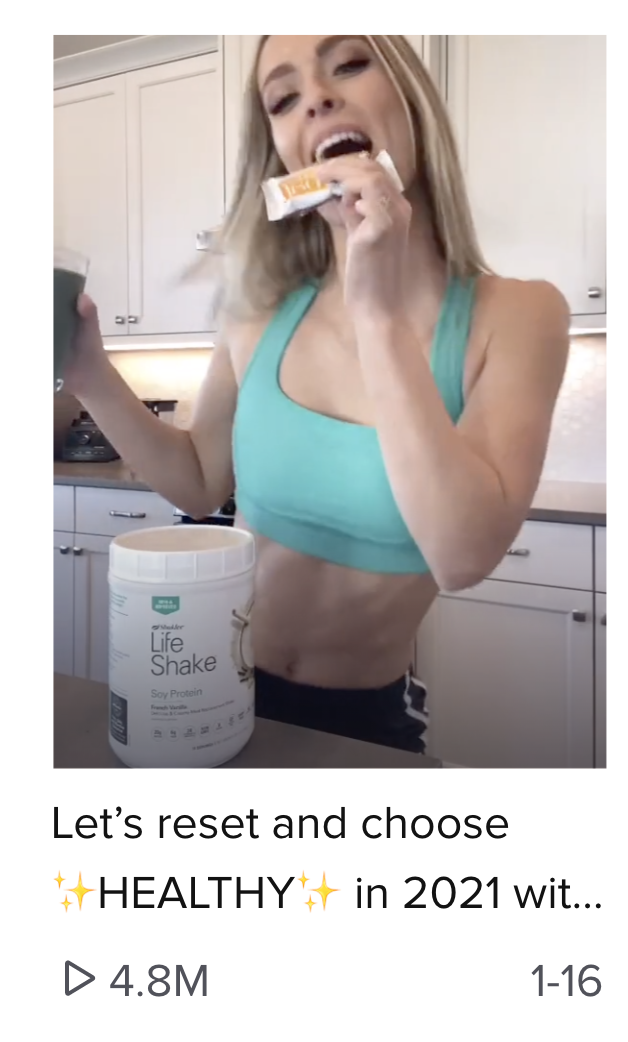 Content promoting Plexus, an MLM that sells nutritional supplements and weight loss products, often circulates on TikTok as well. In June 2020, Plexus was one of several MLMs sent a warning letter by the FTC because some of their representatives claimed that supplements could combat COVID-19 by boosting their immune system. One instance cited by the FTC was a social media user and Plexus distributor who reportedly said, “#VIRUS_CORONA Worried? I’ve been boosting my immune system for several years with high-quality Plexus supplements. You can too!”

Representatives of the company often push similar miracle health claims on TikTok, telling users that Plexus’ products will manage blood sugar, pain, and weight loss. This particular rhetoric is especially dangerous, as it can encourage users to stop taking medicine prescribed by physicians and switch to unregulated supplements sold by people with no medical background. 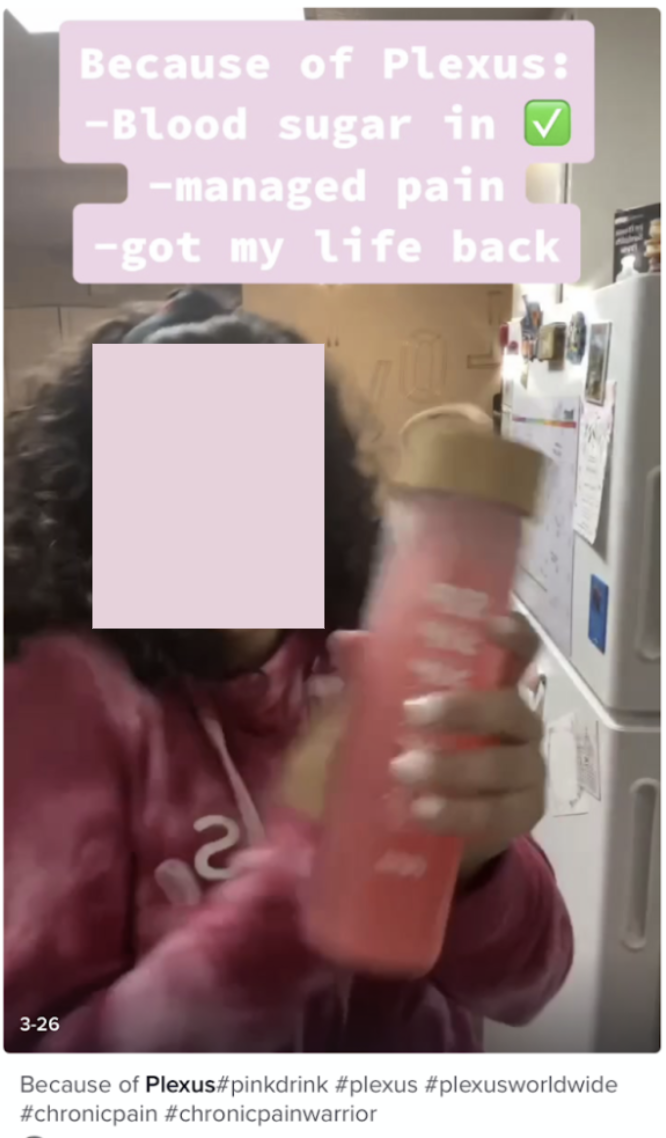 It Works! is another popular MLM scam promising weight loss and selling products like “skinny tea,” “skinny brew” coffee, and supplements on TikTok.

Despite guidelines to prevent predatory schemes from advertising on the platform, content promoting MLM companies is not being restricted by TikTok. Users can freely search them, and the “user” tab is often populated with accounts solely dedicated to recruiting others to join specific MLMs.

Take Herbalife for example: Although MLMs are allegedly prohibited from TikTok, the Herbalife community (a well-known MLM) remains extremely active. 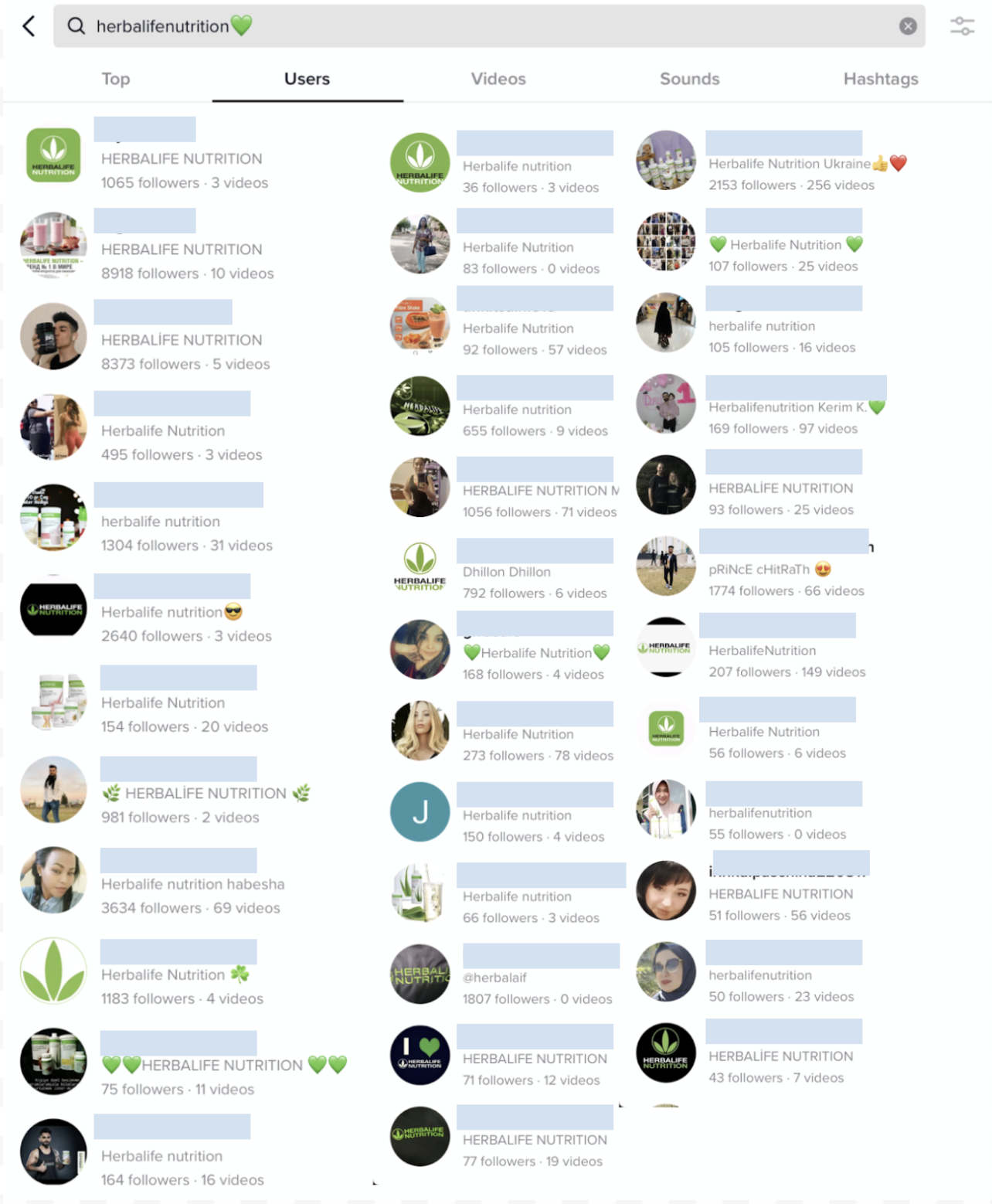 This targeted and predatory recruitment of young and vulnerable users, often women, must stop. TikTok must begin aggressively enforcing its own community guidelines against MLMs or remain complicit in financially and physically harming its own users.